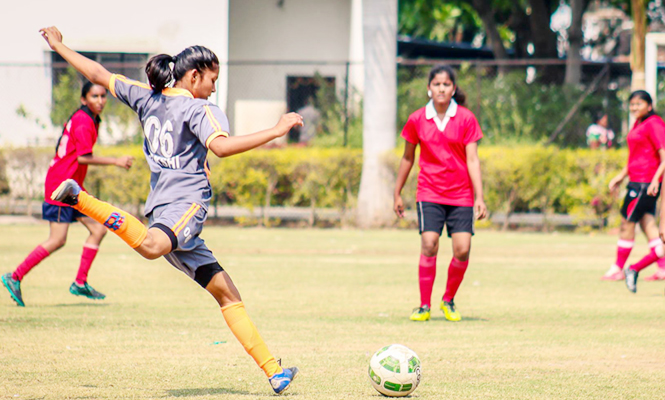 Women’s cricket team’s performance truly caught the nation’s imagination this summer. We hope that a lot many more girls are inspired to pick up professional cricket.

Along with cricket, and of course badminton and tennis, we hope a lot more girls pick up professional football. And if we go by the current MSSA’s girls’ football tournament, looks like girls are totally into football.

There is the Indian Women’s League, organizing football tournaments between different states in India for the last 20 odd years.

Since last year, WIFA, or Western Indian Football Association has been organizing pre-qualifier rounds for the IWL. This year, the second one, the number of teams have gone up from 3 to 6!

So how are they preparing for the pre-qualifiers? This is a brand new territory for them after all!

Says Hemant Pawale of Football School of India (FSI), “We are focusing on conditioning training with Speed/ Strength/ Agility/ Endurance.” While Anjali Shah of Premier India Football Academy (PIFA) says, “PIFA is doing its best to get the girls ready with regular training, preparing them physically, tactically, mentally and socially.” On the other hand, Marcellus John of Bodyline FC says, “We are trying to work hard, but the unavailability of ground for practice and then, with some players working or studying, it is difficult to get all at the same time on ground for practice… but, we think we are managing..”

“Focusing on the mental strength of our players as they have to cope with a higher level of play,” says Kimberly Miranda of Rush Soccer

For Bodyline FC and Rush Soccer, this is the second year of participating; where as for FSI and PIFA this is the first year and it will be interesting to see how the games pan out! Most of the team heads are excited about the upcoming event and hope that women’s football gets a great response this year!

1 thought on “The ground is all set for IWL pre-qualifiers!!”