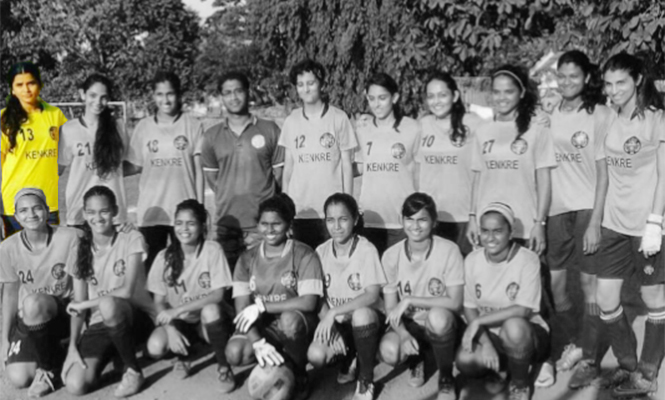 Niyati Bharucha started off her career as a writer and moved on to work as a Marketing Manager for a creative group. But that is not why we are featuring her here!

Niyati also happens to be a passionate footballer, playing for her childhood club Kenkre FC.

An alumnus of the Bombay Scottish, Niyati has grown up playing a number of sports like hockey, throwball, shot put and running; but football remained her favourite. She continued playing football and even represented Jai Hind college, where she completed her graduation.

“My elder brother introduced me to football when I was 8 and I’ve been playing ever since.” says Niyati, “I’ve grown up watching matches with him.” Niyati has been playing football for almost 19 years now and feels she will play for as long as she can.

“I probably wouldn’t have played for this long without my parents’ support,” Niyati points out, “and parents need to understand that it’s tough for a passionate player, or for anyone, to achieve success in their career or industry without it. But I see that the mentality of parents has changed a lot in the last few years, especially when it comes to girls playing football. I really have high hopes for my sport and fellow footballers in India.”

“Practice hard and never stop playing after you finish studying; never give up on your skill and love for the sport, that is the most important part of being a professional footballer.

Play with different players to understand their mentality and vision faster. Adaptability is as important as having a strong personal style of play, on and off the field.”