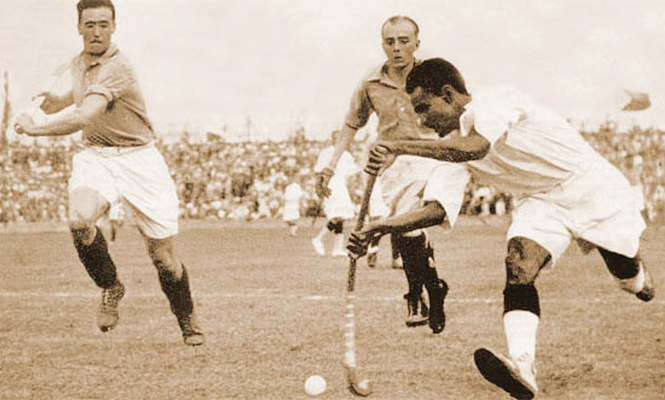 Dhyan ‘Chand’ Singh was an Indian field hockey player, who is considered to be one of the greatest players in the history of the sport. He is known for his extraordinary goal-scoring feats, in addition to earning three Olympic gold medals (1928, 1932, and 1936) in field Hockey during an era where India was the most dominant team. His influence extended beyond these victories, as India won the men’s field hockey gold medal in seven out of eight Olympics from 1928 to 1964.

Dhyan Chand was born on 29TH August 1905 in Allahabad. His father was in the British Indian Army, and he played hockey in the army. As a result of his father’s numerous army transfers, the family had to move to different cities and as such Chand had to terminate his education after only six years of schooling. The family finally settled in Jhansi, Uttar Pradesh, India. Chand joined the Indian Army at the age of 16. Since Dhyan Singh used to practice a lot during the night after his duty hours, he had to wait for the moon to come out so that the visibility in the field improved. He was hence called “Chand”, by his fellow players, as his practice sessions at night invariably coincided with the appearance of the moon. Between 1922 and 1926, Chand exclusively played army hockey tournaments and regimental games. As a result of some stellar performances, Chand was ultimately selected for the Indian Army team which was to tour New Zealand and the team won 18 matches out of 21, drawing 2. After successfully reintroducing hockey in the Olympics, a newly formed Indian Hockey Federation (IHF) made preparations to send its best possible team for the 1928 Amsterdam Olympics. An Inter-Provincial Tournament was held to select India’s national field hockey team and Dhyan Chand who played for the United Province was selected for the Indian National team. In the 1928 Amsterdam Summer Olympics, the Indian team was put in the Division A table, along with Austria, Belgium, Denmark and Switzerland. On 17 May the Indian national hockey team made its Olympic debut against Austria, winning 6-0, with Chand scoring 3 goals. The next day India defeated Belgium 9-0. On 20 May, India beat Denmark 5-0, with Chand netting 3. Two days later, he scored 4 goals when India defeated Switzerland 6-0 in the semi-finals. The final match took place on 26 May, with India facing the home team of the Netherlands and managed to defeat the hosts 3-0 with Chand scoring 2 of the goals. Chand was the top scorer of the tournament, scoring 14 goals in 5 matches. A newspaper report about India’s triumph said, “This is not a game of hockey, but pure magic. Dhyan Chand is, in fact, the magician of hockey.”

Dhyan Chand led the Indian team to win the gold at the 1932 Olympics in Los Angeles and another gold at the 1936 Olympics at Berlin. Known as “The Wizard” for his superb ball control, Chand played his final international match in 1948, having scored more than 400 goals (highest goal scorer in the history of hockey) during his international career. The Government of India awarded him the third highest civilian honor of Padma Bhushan in 1956. His birthday, 29’th August, is celebrated as National Sports Day in India every year.

We hope Dhyan Chand’s stellar career and passion for our national sport encourages and inspires the younger generation!