Anju Bobby George was born in the Kochuparambil family in Cheeranchira village, Kottayam, Kerala, into an 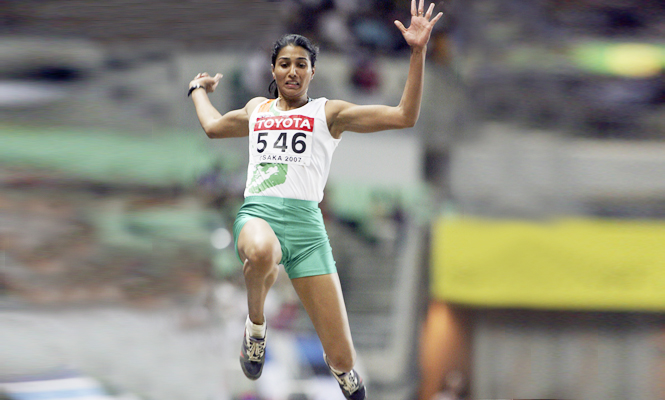 Orthodox Syrian Christian family. Her father introduced her to athletics, an interest further developed by her trainer in her school. In the school athletic meet in 1991–92, she won the 100 m hurdles and relay and stood second in long jump and high jump events, thus becoming the women’s champion. In 1999 Anju set the national record for triple jump in the Bangalore Federation Cup and won a silver medal at the South Asian Federation Games in Nepal. In 2001, Anju bettered her own record in long jump to 6.74 m in the National Circuit meet at Thiruvananthapuram. In the same year she also won gold for triple jump and long jump in the Ludhiana National games. The next year, she the bronze by clearing 6.49m at the Commonwealth Games in Manchester and won the gold medal at the Asian Games in Busan. Anju made history when she won the bronze for Long Jump at the 2003 World Championships in Paris, becoming the first Indian athlete ever to win a medal there. She achieved her personal best of 6.83 m, at the 2004 Olympics at Athens that brought her to the fifth position. This is the current Indian national record. She received the Arjuna award in 2002 and Rajiv Gandhi Khel Ratna award in 2003. Anju’s journey to success from rank 61 in 2001 to rank 6 in 2003 within a short span of two years, was one of sheer hard work and intensive planning. We hope Anju Bobby George’s inspiring journey motivates and increases the participation of the
youth in athletics.