13th October 2020 is a historic date for Badminton lovers. After a lot of drama and confusion, Danisa Denmark Open 2020 commenced. It saw top shuttlers in the mix to win the Super 750 Event.  Denmark Open  is the first BWF affiliated Badminton Tournament after a 6 month halt due to the global pandemic. Just before the Denmark Open 2020,  the prestigious Thomas and Uber Cup, which is a team event, was postponed citing the risks of the Covid-19 spread.

Subhankar Dey and Ajay Jayaram both lost their respective matches in the first round of the tournament. Kidambi Srikanth, the 5th seed in the tournament and he comfortable won his first-round against England’s Toby Penty by 21-12, 21-18. Lakshya Sen, who is regarded as India’s next big prospect, registered a win over his French rival- Christo Popov by the score of 21-9, 21-15.

But the young Indian shuttler could not go past Denmark’s Hans-Kristian Solberg Vittinghusin the 2nd round of the tournament. Lakshya Sen put up a tough fight but lost to the Danish player with a score of 21-15, 7-21, 17-21. Although, Kidambi Srikanth registered a commanding victory against Canada’s Jason Anthony Ho-Shue (21-15, 21-14) and secured his spot in the Quarter-Finals of the Denmark Open 2020.

Kidambi Srikanth was the lone ranger of the Indian Contingent at the Denmark Open and was facing Chinese Taipei’s, Chou Tien Chen. Chou Tien Chen is World No.2 and was the top seed at the Denmark Open 2020. Kidambi Srikanth’s form since 2018 was consistently dipping, and that had resulted in a drastic fall in his rankings. While the convincing victories in the first and the second round of the events could act as motivation, facing the top seed was never going to be an easy job. 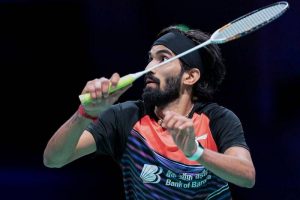 In the first game, Srikanth attacked well and was moving all over the court. Srikanth was quick and making the opponent react to his shots. Despite that, Chou Tien Chen kept closing in on the gap, but the Indian managed to win the first game by 22-20. In the 2nd game, Chou started pressing and concentrated more on his defensive returns, which worked in his favor as Srikanth leaked points. Srikanth lost the 2nd game by 13-2.

After the set-back, Srikanth never really recovered and looked passive in the 3rd and final game. He scored better and managed to win 16 points, but it was too late as Chou Tien Chen won the 3rd game after taking a massive lead. Srikanth’s returns and selection of the shots could have been better as he was unable to find any answers to Chou’s returns. It is unlikely to be controversial to say that Chou performed in the 3rd game.

With Srikanth’s loss in the Quarter-Finals, India’s journey at the Denmark Open came to an end. It would be unfair to call it a poor performance because there were a few positives. Srikanth looked impressive and dominating and could gain his form again. Lakshya Sen played fearlessly and was trying to dominate right from the start. Despite the loss, Indian participation was limited to Men’s Singles. Apart from that, it was a super 750 event, especially amidst the global pandemic, so it could take a few more days to shrug off the rustiness and get in the zone.

Now after Denmark Open 2020, Indian shuttlers will have to wait for confirmations of the future tournaments and plan their Badminton calendar accordingly to secure their berth at the Tokyo Olympic Games.