Another goal fest took place in the Premier League on the weekend as
Matchday Five registered 28 goals. Here is a review of all matches that took
place in Game Week Five.

The 237th Merseyside Derby stayed true to its fiery nature, as it ended in a thrilling 2-2 draw between Everton and Liverpool. The premier league champions took an early lead as Sadio Mane scored from Andrew Robertson’s pass. Virgil Van Dijk limped off in the 11th minute as he got injured by a lunging tackle from Jordan Pickford. Everton took advantage of this, as Michael Keane’s powerful header saw the back of the net, as it went through Adrian’s hands in the 19th minute. 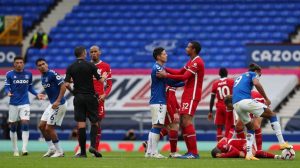 Liverpool continued to dominate possession and came close to taking lead again as Mane’s shot slightly off target. Brazilian international Richarlison almost put Everton ahead when his header hit the post in the 60th minute. PL Golden Boot winner Mohamed Salah put Liverpool in front again as he struck a powerful volley that came off a weak clearance from former Barcelona player, Yerry Mina. The lead didn’t last long as the in-form Dominic Calvert-Lewin leaped the highest and headed in a spectacular goal in the second half. In the dying stages of the game, Richarlison received a red card for a reckless tackle on Thiago. Jordan Henderson thought he had scored the winner in the extra time but the goal was disallowed after a controversial VAR intervention ruled Sadio Mane offside in the build-up to the goal.

A meeting between Pep Guardiola, the master, and Mikel Arteta, the apprentice was always going to be interesting. If City were missing Kevin de Bruyne, in came a fit-again Sergio Aguero to ease attacking concerns. And even if the Citizens settled this game of chess via Raheem Sterling, the Gunners, for their part, set up nicely and had their moments in the game. Further proof of progress, and rebuild under Arteta. Ederson was forced into a few good saves himself, and you get the sense the blue half of Manchester are still to convince fully in defence. An injury to Aymeric Laporte didn’t help matters either. 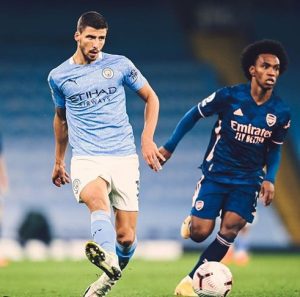 The win came at a good time for City, given Liverpool’s wobbles with a bit for form, and injuries. Arsenal on the other hand avoided a familiar slap at the hand of another big rival, could’ve easily won the contest had they taken their chances, and continue to look as though they are working towards something far better and bigger under Arteta. In the end, systems, tactics, and energy aside, the team with simply the better players won.

After two humiliating losses at the hands of Crystal Palace and Tottenham Hotspur, Manchester United needed a response and the Red Devils did. Just like vintage Manchester United, they left it late.

Newcastle got off to a flying start with Emil Krafth’s shot went inside of Luke Shaw and the toon army led in under two minutes. In the 23rd minute, Harry Maguire equalized shutting down all the critics.

In the 58th minute, United fans would have felt they were closer to three points as United won a penalty. To everyone’s surprise, Bruno Fernandes missed. From there on it was the Karl Darlow show. 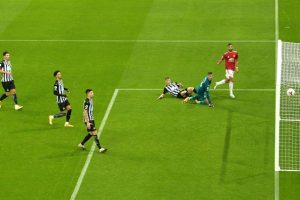 The Newcastle keeper was in beast mode, saving everything. However, in the 85th minute, a well-placed finish from Bruno Fernandes put Manchester United ahead. From there on it was all Manchester United.

Just five minutes after Fernandes put United in the lead, Aaron Wan Bissaka’s crackling strike doubled the lead for the visitors. On the final counter-attack of the game, Fernandes assisted Rashford who made it four.

The Blues got off to a stellar start taking the lead in the 15th minute. A brilliant trick by Werner took Bednarek by surprise as the German scored his first in the Premier League.

Thirteen minutes later, Chelsea Number 11 showed some brilliant skill off a precise long ball from Jorginho to double the lead for the London club. 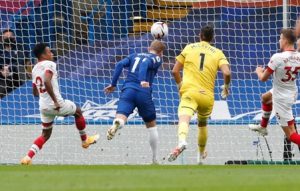 Che Adams brought The Saints on level terms after in the 57th minute after a huge mix-up between the Chelsea defense and goalkeeper. Unfortunately, that happiness would not remain for long as Kai Havertz put his team ahead just two minutes after the equalizer.

Just as the Blues were in complete control and were looking to kill the game, Jannik Vestergaard put his head to the ball of a good volley from Theo Walcott in the 92nd minute of the game to equalize, yet again.

Both teams won a point each which took Chelsea to sixth and Southampton to tenth.

Jose Mourinho and Tottenham Hotspur were flying sky-high after they thumped Manchester United 6-1 at Old Trafford a fortnight ago. While everyone eagerly awaited the return of Gareth Bale, the Welsh wizard was on the bench.

The Heung-Min Son and Harry Kane connection put Spurs ahead in the first minute. The England captain then tripled the lead, scoring a brace in the eighth and sixteenth minute.

The North London club went into halftime with a comfortable 3-0 lead. The moment Spurs fans waited for arrived in the 72nd minute when Gareth Bale came on for Steven Bergwijn. 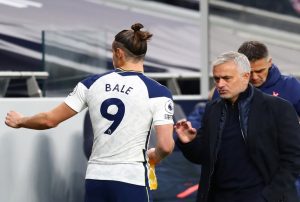 In the 81st minute, Hammers full-back Aaron Cresswell pulled one back for the visitors, which then looked like a consolation goal. Four minutes later West Ham scored another as Coufal’s cross was turned into his own net by Davinson Sanchez.

The shock of the evening came in the 94th minute when literally on the last kick of the game second-half substitute Manuel Lanzini scored a beauty. Both teams shared the spoils and got one point each.

Wolves travelled to Elland Road to face a Leeds United that has impressed everyone. From the get-go, it was a traditional Marcelo Bielsa football. For the first 35- 40 mins, it was all Leeds as Wolves tried to weather the storm.

Rodrigo saw two of his headers narrowly go off target. As the game was approaching half time a quick counter-attack from Wolves saw Daniel Podence had a try at the goal which was saved by Illan Meslier. 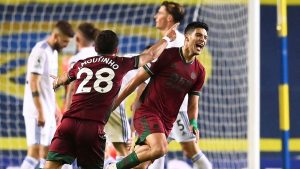 In the 54th minute, a cracking left-footed volley from Romain Saïss was canceled out by VAR. Sixteen minutes later Raul Jimenez scored for Wolves with the help of a deflection from Kalvin Phillips.

Wolves took all three points from Elland Road after a solid defensive performance.

In the remaining games in the league, Leicester City and Aston Villa fought tooth and nail at the King Power Stadium. Both teams displayed a defensive masterclass throughout the game. 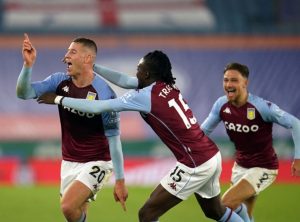 However, a late 90+1 goal from substitute Ross Barkley sealed the win for Aston Villa. The Clarets are the only undefeated team apart from Everton.

A mid-table clash saw Crystal Palace take on Brighton and Hove Albion locked horns at Selhurst Park. Wilfried Zaha has a terrific record against Brighton in past and it continued after scoring a penalty in the 19th minute.

Alexis Mac Allister saved the day and a point for potters drilling in a deflected effort from the edge of the penalty area. 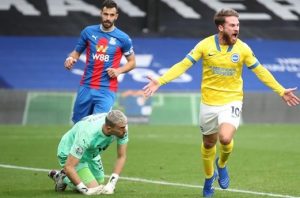 It was 19th vs 20th at Bramall Lane as Sheffield United took on Fulham. Ademola Lookman scored in the 13th minute to put Fulham in the lead. United left it late thanks to Billy Sharp. 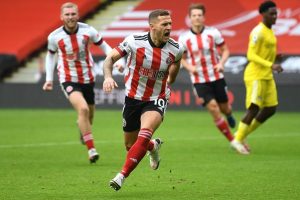 Sharp came on in the 85th minute and successfully converted a penalty. Both the bottom-placed clubs earned their first point this season.