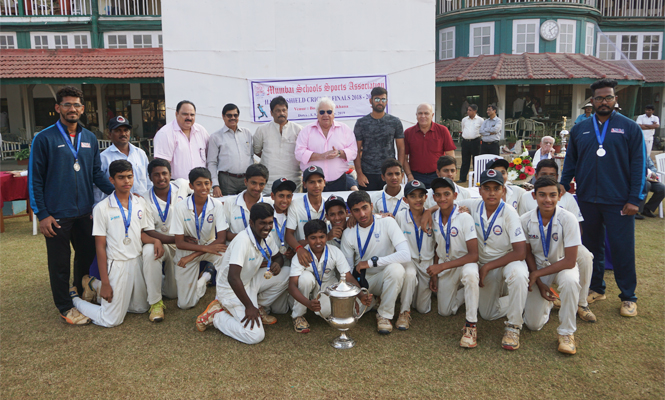 Bombay Gymkhana was all set for the mega Harris Shield Final. Harris Shield is a prestigious 100+ year old tournament in which, cricket is played for 3 days to promote long knocks and develop perseverance and tenacity in young guns.

AL Barkaat got off to a decent start, as they lost their first wicket at a score of 38 runs. But IES New English School, Bandra,  made a strong comeback and Al Barkaat was in trouble when they lost their 4th wicket at only 73 runs. At that point, Al Barkaat needed a strong partnership that came in the form of Saumil P Malandkar (111) & Harshvardhan S Pandey (112), who played an impressive inning that provided AL Barkaat with the upper hand at the end of Day 1! This 180-run partnership changed the game completely!

AL Barkaat declared the match after posing a mammoth score of 371 at a loss of 7 wickets. To win the trophy, IES New English, Bandra, needed a solid start to chase that score. They started very cautiously & could only score 30 runs at a loss of 1 wicket in 30 overs. At the End of the day the score for IES New English, Bandra was 30/1.  On the 3rd day, AL Barkaat has clearly shown their intention by setting up an attacking field. IES New English Bandra was in deep trouble when they lost quick wickets at a score of 88 runs. They were struggling at 88-4. of play & IES New English, Bandra kept losing wickets at regular intervals, getting all out at 217. Rakesh Mann Bhatt played a good knock of 63 but unfortunately didn’t get any support from the other end. Anurag Singh of Al Barkaat took fifer in the mega final. During the presentation ceremony IES New English, Bandra captain Karan Suraya rightly said: “If we had stuck into the crease instead of going for long shots, the match result could have been different.”.

On the other end, Harsh Mogaveera was very happy that under his captaincy he has led AL Barkaat to 2 titles.

Following are the star player of the tournament:

1. Man of the tournament was awarded to Himanshu Singh (Current Mumbai U-16 Player) of AL Barkaat MMI English, Kurla. He has played 3 matches & Bowled 89 overs with 36 maidens, given 159 runs & picked up 15 wickets for his team & in Batting, he has scored 120 runs in 3 games.

3. Best Batsman of the tournament was awarded to Tejas Chalke of Rizvi Springfield, Bandra, He played  5 innings (across 4 matches he has scored 232 runs with a highest score of 100 not out.