As the Premier League progressed to its 6th Gameweek of the season, the weekend witnessed a lot of narrow wins and draws and dead stalemates. With the top-flight teams once again failing to capitalize and gain points, the 6th Gameweek felt less competitive, probably due to the European Leagues picking up pace.

Marcelo Bielsa’s Leeds United faced Aston Villa at Villa Park. Leeds United, who had an excellent run in the PL so far, played aggressively in the first half but failed to score. Although, in the 2nd half of the game, Patrick Bamford, who has been in terrific form, kicked off the goal-scoring spree in the 55th minute. And that was just the beginning as the striker went on to score a hattrick and handed a home- defeat to Dean Smith’s side. The match ended in a 3-0 defeat as Leeds United climbed up the points table and are positioned comfortably in the 6th position. 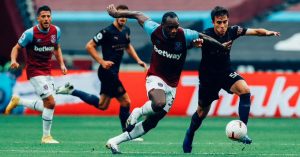 Manchester City hasn’t had the most comfortable start to the season so far, and David Moyes’s West Ham United managed to hold the side to a draw in the fixture. West Ham registered the 1st goal of the match as Michail Antonio fired and helped the team to take the lead. Pep Guardiola’s possession-based attacking play helped Manchester City to equalize in the 2nd half with the help of Phil Foden’s classy finish. Both the teams gained 1 point from the fixture and are placed 12th and 13th respectively in the points table. 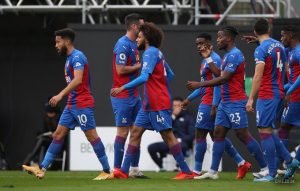 In the opening minutes of the match, Crystal Palace’s Jairo Riedewald scored the first goal of the fixture as Crystal Palace took an early lead. Fulham tried to break through Crystal Palace’s formidable defense several times, but Roy Hodgson’s men did not allow a full chance. Crystal Palace doubled the lead in the 64th minute of the match as Wilfred Zaha scored the goal and extended the lead. Fulham found some compensation in the final minutes of the game when Tom Cairney scored in the 95th minute. Although, the match had turned in Palace’s favor after Zaha’s strike as Palace won the away game and bagged the 3 points from the match. 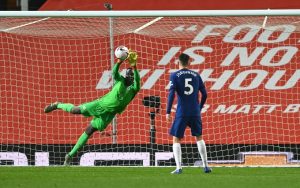 The match between United and Chelsea was the most awaited fixture of the Gameweek. With both managers and teams under the scanner, they had a point to prove. The match was supposed to be extremely challenging, but it turned out as a stalemate. Chelsea’s attacking prowess should have troubled United’s ridiculed defense and vice-versa. The match ended in a dull goalless draw as Chelsea’s attack failed to terrorize the United Defense. Chelsea’s Edouard Mendy made some excellent saves to keep a clean sheet with the help of the defenders. Both teams had an equal share of positives and negatives to take from the game. 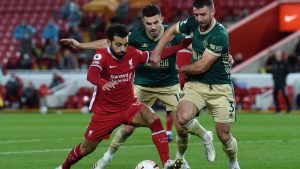 Sheffield United surprised every football fan with an impressive run in the previous season, but the team has not managed to replicate this season. In the absence of Liverpool’s Centre Back Virgil Van Dijk, Sheffield had an opportunity to pull off an upset. The side was in the right direction by scoring the first goal of the match and taking in the lead, thanks to Berge’s spot-kick. Sheffield managed to hold the advantage until the 41st minute of the game when Firmino scored a crucial equalizer before going into the half time. In the 2nd half, Liverpool’s new signing Diago Jota scored the goal and took the lead in the fixture. Sheffield United failed to score an equalizer as the game ended in a 2-1 victory for the hosts at Anfield. 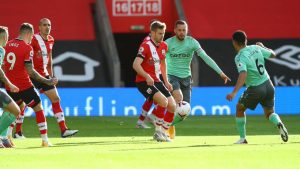 As the song and the chant suggests- And the saints go marching in, Southampton left no stone unturned and registered a thumping 2-0 victory against Everton teams. The fixture was not amongst the most anticipated one, but both the teams who usually finish in the mid-table are having a brilliant start to this season. The Everton side, which seems stronger than ever, both on and off the field, looked unstoppable with James Rodriguez and Dominic Calvert Lewin contributing in every match. Despite that, Southampton spoilt the party by scoring two goals in the first half. James Wary-Prowse and Che Adams registered their names on the scoresheet, both goals assisted by the in-form striker Danny Ings and maintained the lead throughout. Although, the loss against Saints does not affect Everton’s position as the side is still on the top of the table with 13 points. Meanwhile, Southampton is placed 6th and will hope to break in the top-4 in the upcoming games. 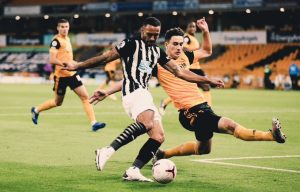 Wolves hosting Newcastle was always going to be a fascinating fixture. The match ended in a draw, but there were moments of tension, pressure, and aggression at critical junctures. Wolves found the opener in the 80th minute of the game as Raul Jimenez, who rarely disappoints, found the back of the net. But Wolves could not hold on to the lead as Newcastle United’s Jacob Murphy equalized in the 89th minute of the game. The fixture ended in a 1-1 draw as both teams settled for a point each at the end of 90 minutes.

Brendon Rogers’s Leicester City played against Mikel Arteta’s Arsenal at the Emirates Stadium. The fixture was supposed to be fiery as both teams had gained form. Brendon Rogers did not start Jamie Vardy in the XI, but the striker came on in the 2nd half and scored the only goal of the match in the 80th minute of the game. Tieleman’s extraordinary passed found Cengiz Under near the box, who crossed the ball to Jamie Vardy as the English striker scored the winner.

Arsenal could not convert any of its half chances and suffered a defeat at home. 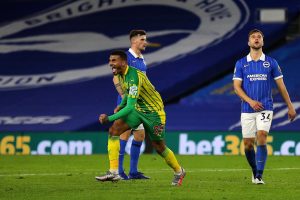 West Brom faced Brighton in an away fixture and was looking to capitalize on the absence of Brighton’s captain and center-back Lewis Dunk’s suspension in the previous game against Crystal Palace. Although, West Brom could only hold to a 1-1 draw, as West Brom skipper Jake Livermore, unfortunately, gifted an own goal to the home side. Karlan Grant found a late equalizer in the 84th minute of the match as both teams took a point each from the fixture. Brighton and West Brom are now at 16th and 17th position in the points table. Yet again, West Brom failed to win a PL fixture in the season and are without a win after playing six games. 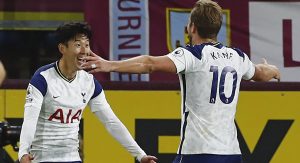 Tottenham Hotspurs continued their excellent run under Jose Mourinho as the side defeated Burnley in an away fixture. At Turf Moor, the combination of Heung Min Son and Harry Kane yet again created magic on the field as the South Korean player scored the only goal of the match. Spurs have played exceptionally well in the PL Season of 2020-2021, with new signings coming in and the Club greats like Kane and Son contributing in every game. Spurs missed out on many half chances that could have extended the lead, but the “special one” won’t mind the final result of the fixture. Spurs kept a clean sheet and are looking in great form. Meanwhile, Burnley is yet to record a win and have lost four games and drawn one so far. Burnley is struggling to get off the mark and is currently in the relegation zone along with Sheffield United and Fulham, who share the same story.

Review of Game Week 5 of the Premier League