Sachin Tendulkar, famously known as the ‘God of Cricket’ has turned 47 today.

The legendary Indian batsman was the definition of cricket for many across the world during his decorated 24-year international career. Fans switched off their televisions as soon as the ‘little master’ was dismissed and at other times were held to the edges of their seats when he was at the crease.

Sachin Tendulkar made his debut at the young age of 16 against Pakistan and went on to become one of world’s iconic cricketers. His voracious appetite of scoring runs and breaking records also drew comparisons to Australian great Don Bradman.

Tendulkar announced his retirement from ODIs in December 2012, from T20 in October 2013, and finally, from all forms of cricket on November 13, 2013, after playing his 200th and final Test match against the West Indies at his home ground, Mumbai’s Wankhede Stadium. 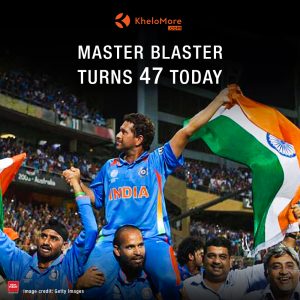 Tendulkar and the number game

Tendulkar was the first player to smash a double hundred in ODIs when he struck 200 not out off 147 balls against South Africa in Gwalior on February 24, 2010.

On March 16 in 2012, Sachin Tendulkar became the first and only batsman in the history of the game to score 100 international centuries, a record that will probably remain forever. Tendulkar ended a year-long and 34 innings wait as he managed to score 114 off 147 balls against Bangladesh in the Asia Cup at the Shere Bangla stadium in Mirpur.

He made a record six World Cup appearances eventually ending up on the triumphant side in his last, in 2011 at the Wankhede stadium when India defeated Sri Lanka in the final.

No birthday celebrations due to Covid-19 crisis

Tendulkar has decided not to celebrate his birthday this year as a mark of respect to the frontline workers leading India’s fight against the Covid-19 pandemic.

“Sachin has decided that this is not the time for celebrations. He feels that this is the best tribute he can pay to all the doctors, nurses, paramedics, policemen, defence personnel, who are at the frontline,” a source close to the player told PTI on Wednesday.

Tendulkar has already contributed a total of Rs 50 lakh to the CM Relief fund. He is also involved with several other relief work initiatives.

“He has always been very uncomfortable talking about this aspect,” the source said.

An article by India Today.