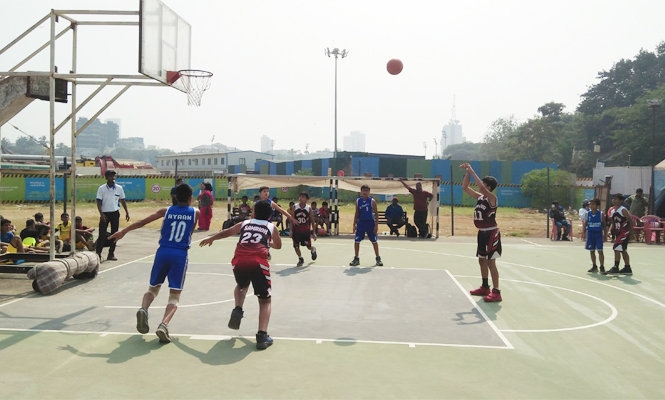 Match: Vibgyor (A) Goregaon vs St. Joseph (A) Wadala

The match took an interesting start as both the teams started off strong; with accurate passes and good defence. The first quarter ended with a 3 – 3. As soon as the second quarter began St. Joseph A team came with a good plan and didn’t allow Dev from Vibgyor (A) Goregaon to score a 2 pointer. He was very sharp at it. The first 3 point among those two was scored by Dev who was the best player of MSSA last year in the same tournament. Joseph boys were relying on counter attack & they successfully did those baskets & by the end of the 2nd quarter, the score was 5 – 10. In the 3rd quarter, Karan Shah of St Joseph was playing his best game and was scoring basket after basket in the counter-attack; alone scoring 5 points. At the end of the 3rd quarter, the score was 12 – 18.

In the 4th quarter, they played a beautiful team game and sealed the match with 18- 26. Karan Shah & Aryaan Shaikh scored 14 points and 11 points respectively & from Vibgyor A team Goregaon the highest scorer was Dev Premi with 8 points.