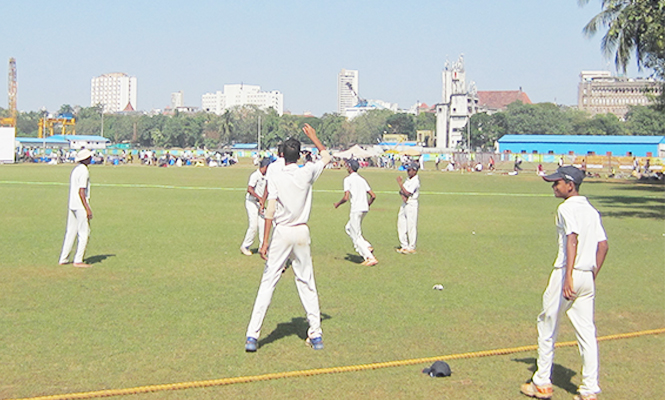 The stage was all set. Harris Shield is a prestigious 100+ year old tournament in which game is played for 3 days to promote long knocks and developing perseverance and tenacity in young guns. After a reschedule due to torrential rain, Bombay Gymkhana is the new venue for the prestigious trophy show. A. L. Barkaat hold an edge after winning Semis against Rizvi Springfield here however the pitch was much altered, supporting spinners than pace attack which was the case last time around. Swami Vivekananda won against the odds downing a resilient Don Bosco in another Semi-final. The high spirits of the team was audible when they came to bowl after winning the toss. The decision was coming to vindication with Niel Vinay Patadi removed Nissar Farooq Shaikh for 9 in 14th over. The script was going to take a nosedive however. Saumil Malandkar(92) and Ankit Yadav(72) forged a 155 run partnership in one of the best batting performances in the whole tournament. Harshvardhan Pandey then added 32 before Golden Bat winner Himanshu Singh trudged on for well made 63 coming at No 9. Giles Shield holders ended off the innings on 374 – all out, in 128.5 overs with 44 runs in extras. Niel Vinay Patade took 5 wickets for 88 runs and Nishant Kadam bagged 2 for 80 runs. Swami Vivekananda were stunned early in the gargantuan chase, as opener Rishi Bhosle got bowled for a duck in 3rd over with 5 runs in total. Nishant Kadam then toiled for his 30 but team slumped to 51/5 in 20th over with follow on looming. Skipper Rishi Shah played masterfully to his 60 but no support saw the team going down for 179 in 69.5 overs. Saud Mansoori took 5 wickets to be crowned Golden Ball, with 44 wickets in Harris Shield, and Sufian khan, Left-arm pacer took 2 wickets for 30 runs. A.L. Barkaat scored 32 in 2nd innings for the expense of 2 wickets in 16 overs of second innings but with not enough time to both Captains unanimously voted A. L. Barkaat champions on first inning lead late in Day 3. 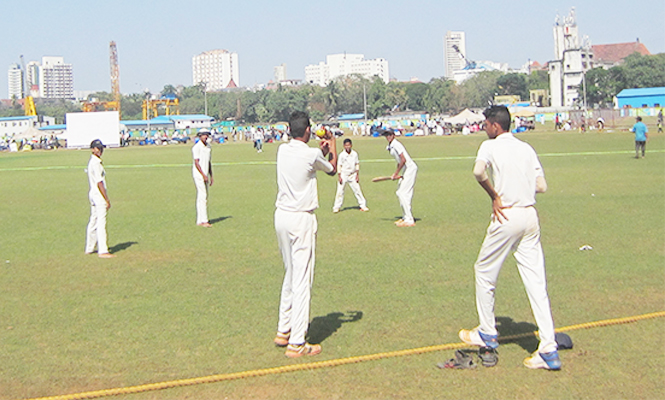