A shout out to all who remember their summers with fondness! Fondness of carefree days spent eating mangoes, or stealing from the chundas, achars and papads that granny would put out to dry on the terrace. Fondness of running in and out of homes with cousins in tow, creating a ruckus…climbing trees.

The best things we all had, and most of you would agree, was the ability to gather friends, cousins and neighbours and simply play outdoors the entire day during summers. And the games we would play!!!

Here’s a list of all our nostalgic summer games –

Gilli danda – Just two sticks and a wonderful game! A small one, gilli and a large one, danda. Gilli is balanced on a stone and flipped by the danda and hit into the air, as far as possible…and some chasing ensues, some seeking ensues and a lot of fun follows. Rules and players can be changed according to the group. 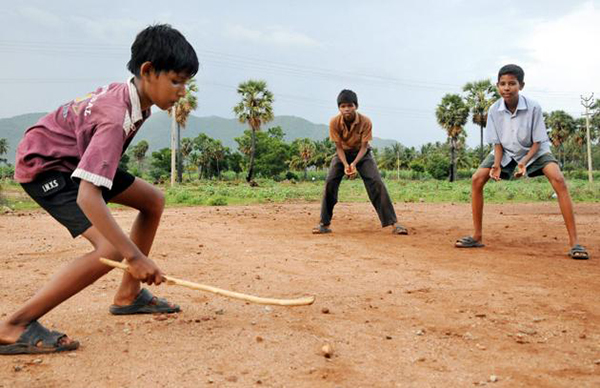 Lagori – Also known as pittu or satoliya, this high energy, outdoor game involves a ball and a pile of flat stones and is generally played between two teams of minimum 3 to maximum 9 players. You got to throw a ball at the pile of stones and hit it. Once hit, you’ve got to replace the pile back while the opposing team will collect the ball and try to hit you and your teammates.

Lock and key – A simple chasing game, somewhat like ‘tag’. Whoever the denner touches or ‘tags’ is ‘locked’. The locked player can’t move and other have to try and be the key to this one while saving themselves from being locked.

L.O.N.D.O.N – A simple ‘statue’ game with a twist. The denner shuts their eyes and says ‘L.O.N.D.O.N. London, stop!’ At the call of ‘stop’ the rest of the players have to literally stop in their tracks, becoming statues. The twist is that when the denner’s back is turned, the ‘statues’ move their positons. If caught in between positions, it is their turn to be the denner.

I spy (eyespies) – This is the simple ‘hide and seek’, but most of us mistakenly called ‘I spy’ as ‘eyespies’. 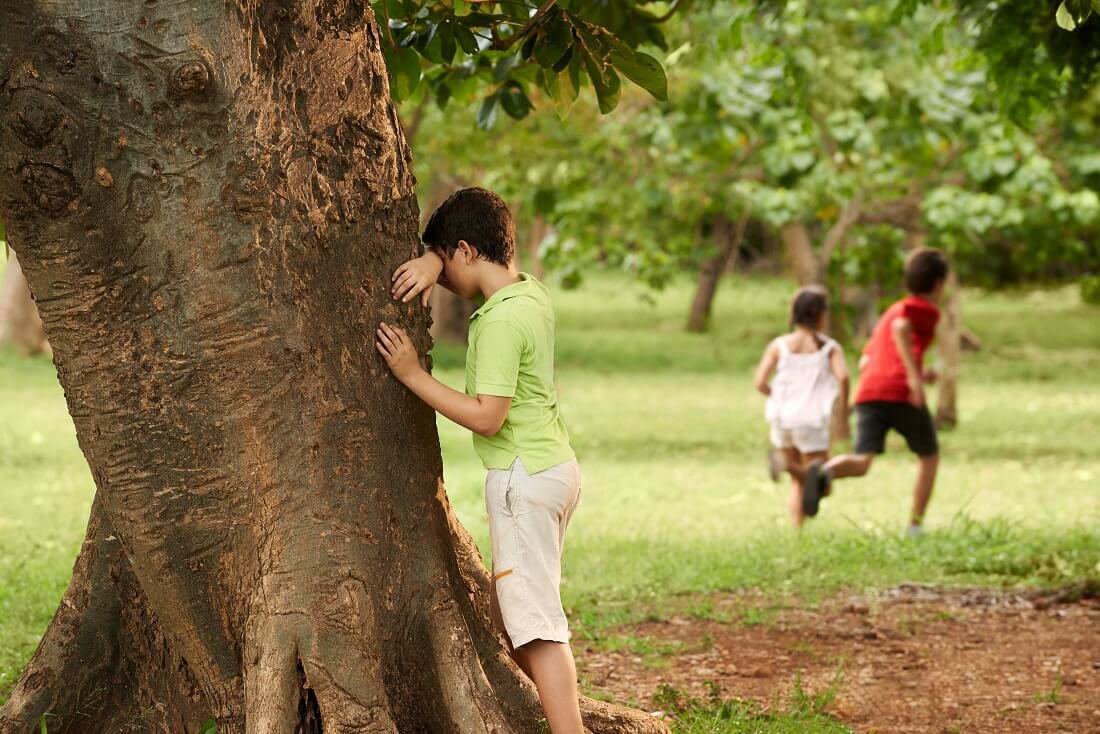 Saakli – Saakli means chain and this is a tag game that forms a chain of the players tagged. It starts off with one who chases the rest of the players. As each player is tagged, they join the denner in chasing the rest by holding hands, hence forming a human chain. After all players are tagged, the one to be tagged first becomes the denner.

Langdi – Another game of tag with a ‘lame’ twist! The denner hops around on one leg to catch the rest who can run on both their legs. 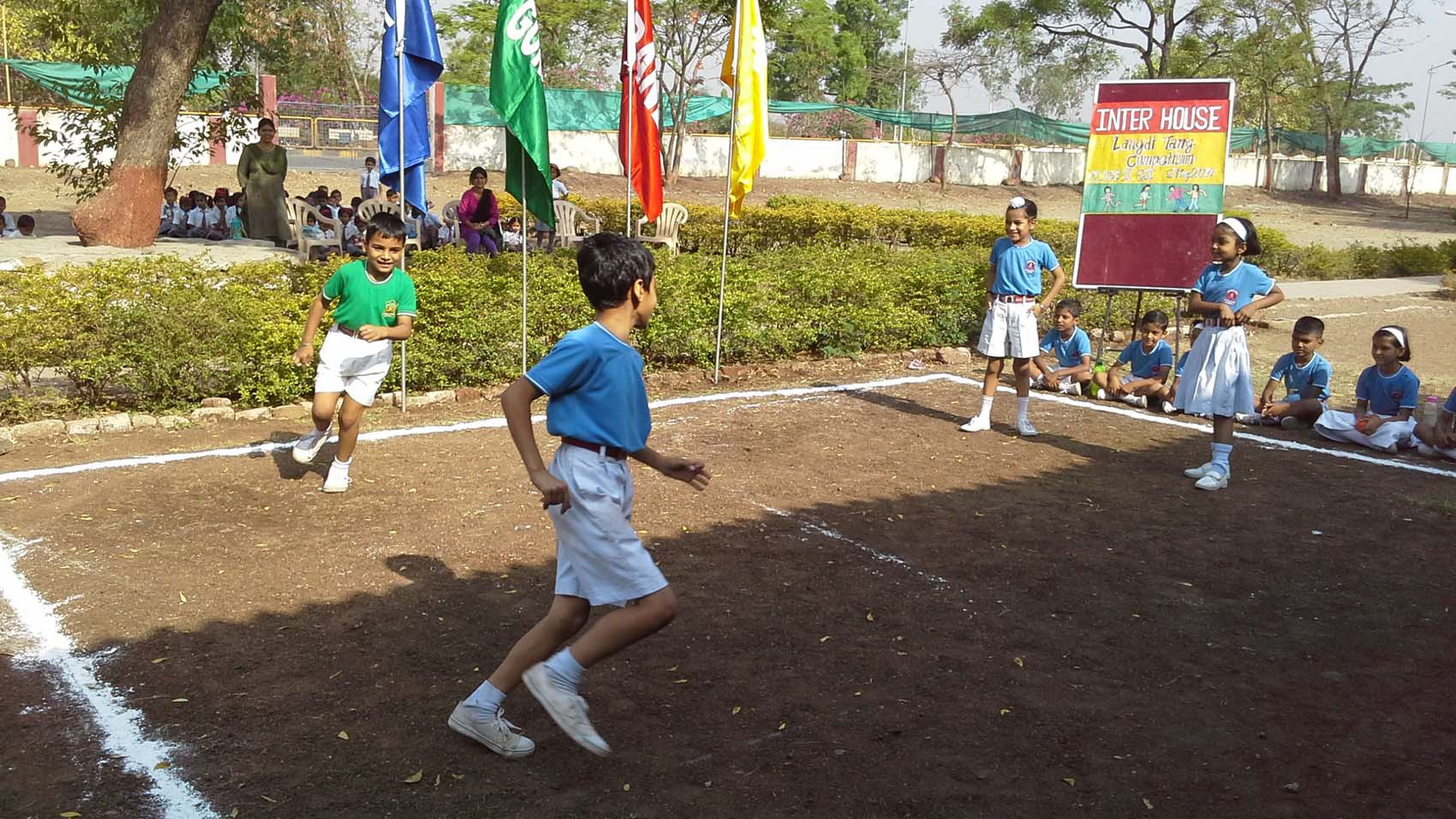 Land and water – Also known as ‘Nadi ki pahaad’, it is another version of the regular tag. The denner is asked to choose between symbolic land or water or nadi (river) or pahad (mountains) and whatever they choose is where the rest cannot go. But as they do, the denner has to attempt to tag them.

Blind man’s buff – Another tag game, this time the denner is blindfolded… 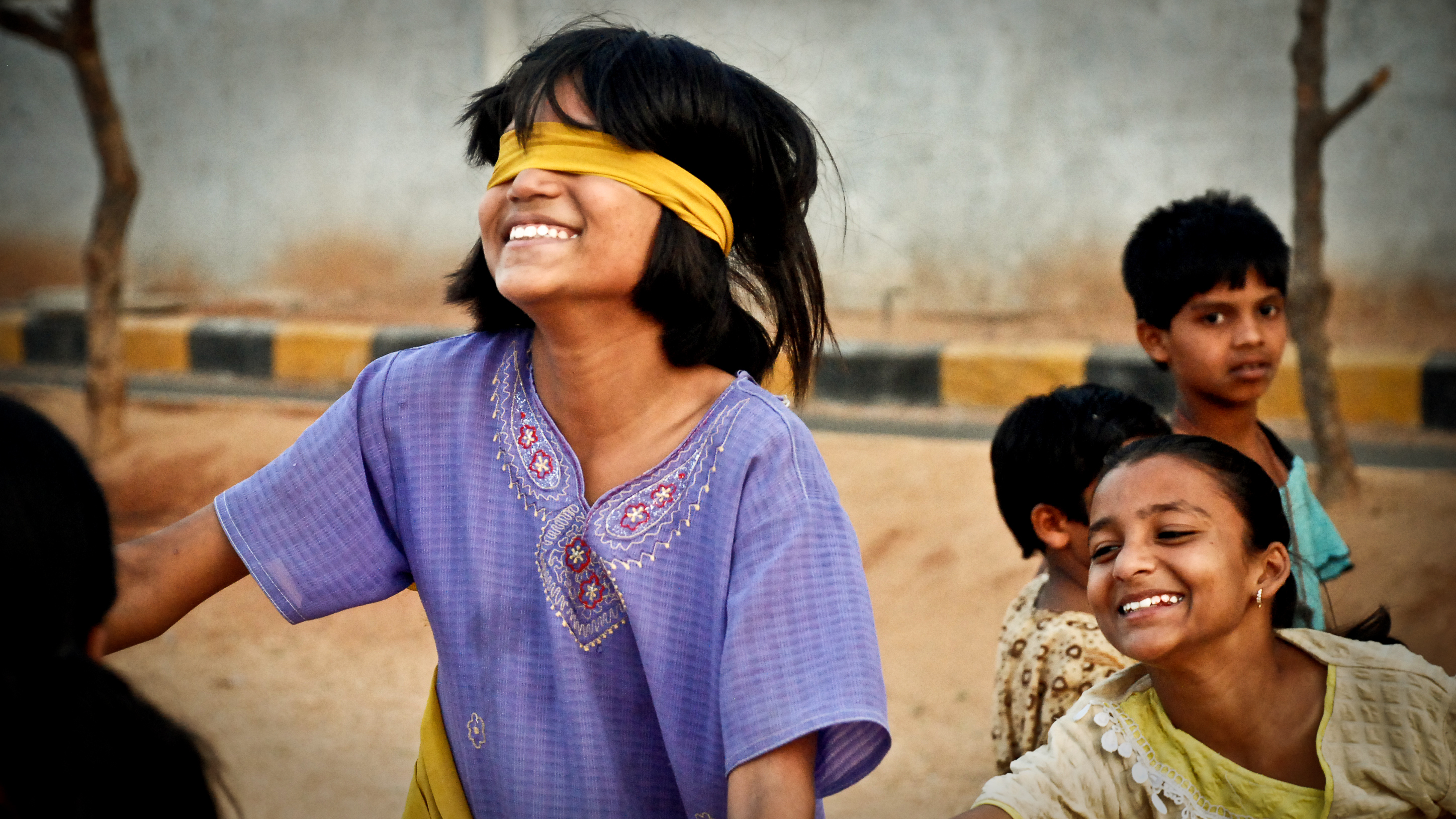 Hopscotch – A simple game of hopping and jumping over a drawn pattern on the floor. 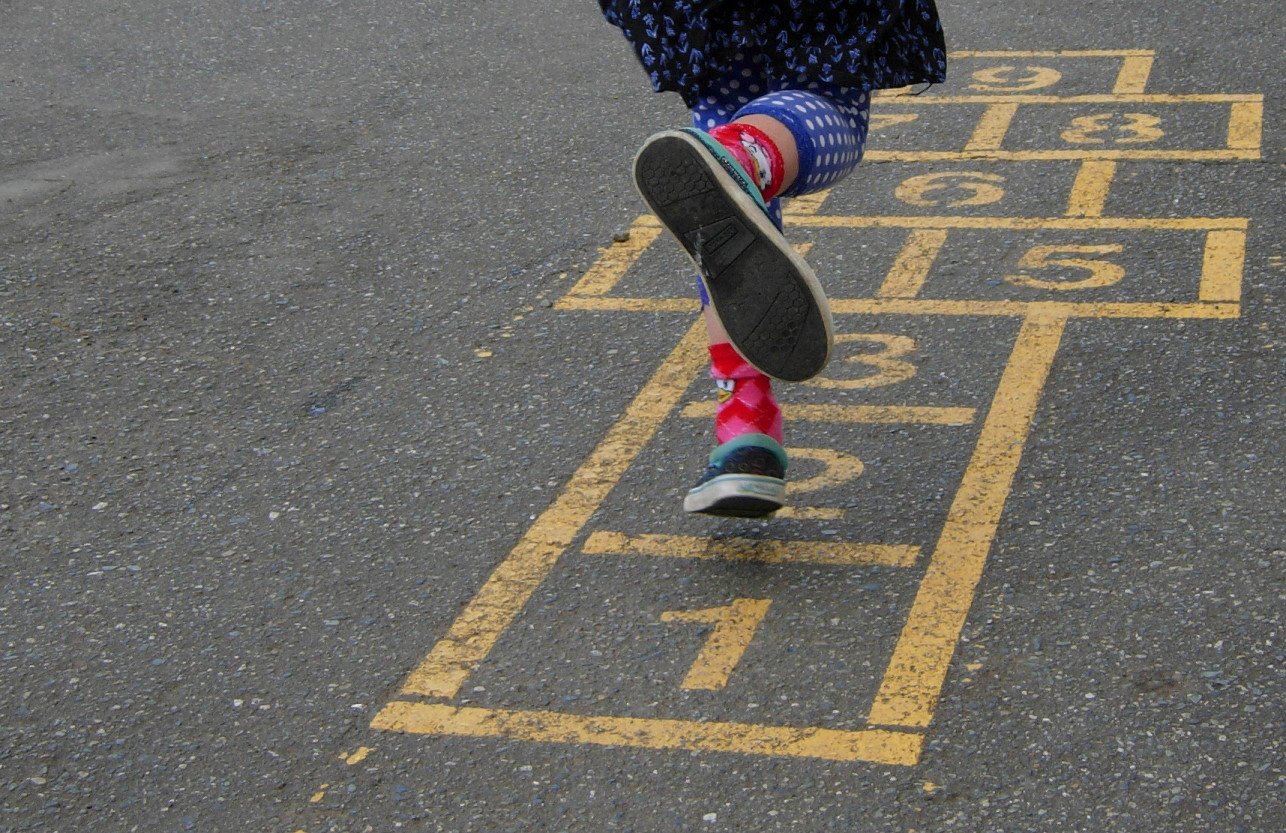 Dog and bone – Two teams, one object (the bone), each attempting to outsmart the other and pick the bone.

Dodge ball – A simple game involving a lot of children standing in a circle. Two players enter the circle and everyone else in the circle tries to hit a ball at the players’ legs while they dodge it. Whoever hits, gets a turn inside the circle.

Colour, colour – A group game again, players choose a denner, who is asked to choose a colour. And before the denner can chase and tag the players, they have to find the chosen colour and touch it.

Goldspot – A group of kids stand in a circle holding hands. They begin the game by shouting ‘goldspot’ loudly, simultaneously jumping back. Someone lays claim to the first spot by shouting ‘king’. They have to now attempt to jump onto to another player’s foot, who has to dodge it. If he successfully dodges, he gets a turn. If he doesn’t, he is out. The games ends when there is one person, the winner, left.

Jump rope – Skipping rope or jump rope is the best pastime ever… and really needs no introduction at all! 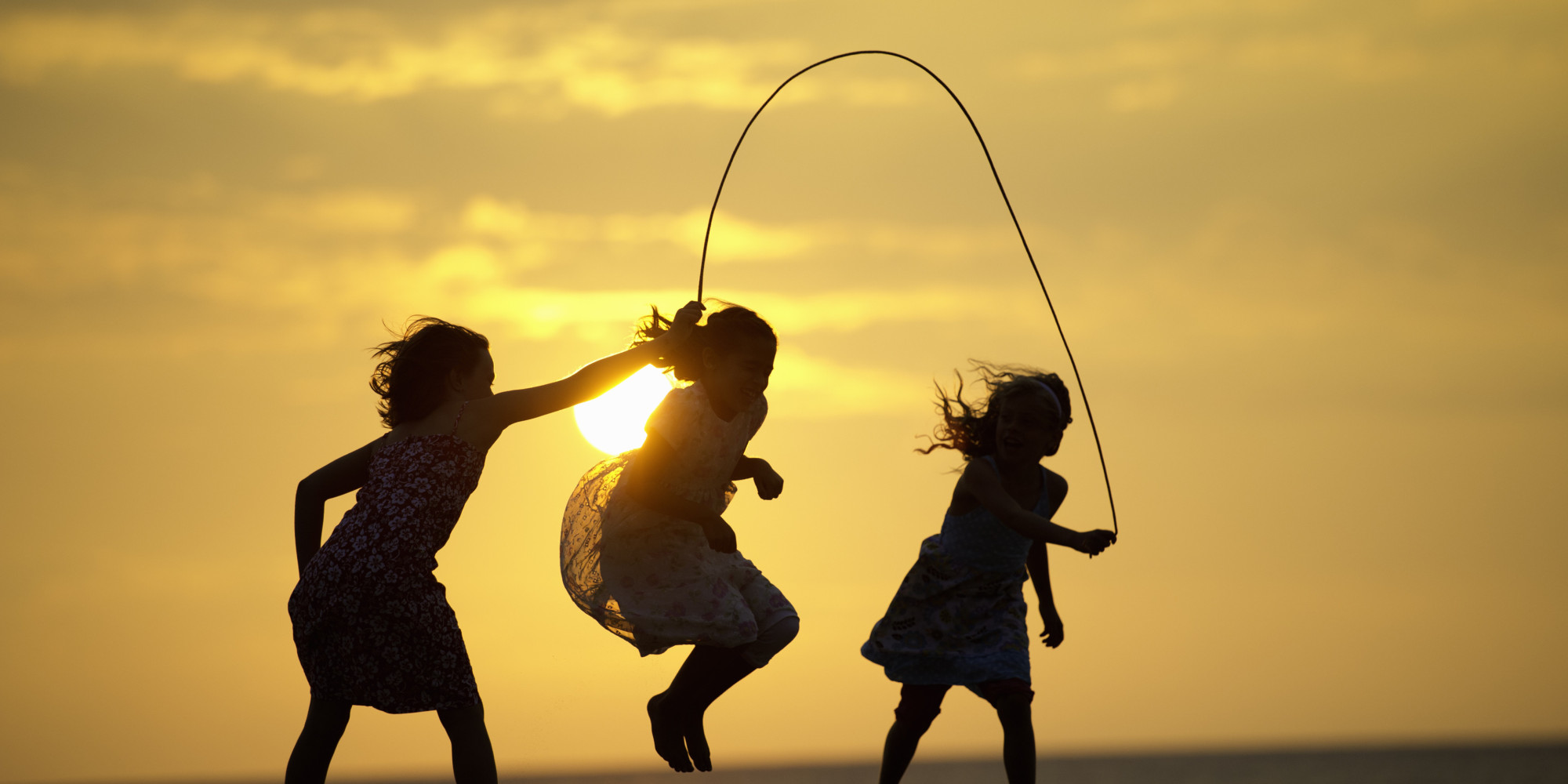 Did we just take you back to your childhood? Or did we miss out something? Write back with your favourite childhood summer games