The MSSA season started off on what happened to be one of the rainiest day this monsoon, but it did nothing to dampen the spirit of Division 1 players of St. Mary’s ICSE, Mazgaon and Navy Children School, Colaba, as they played the opening match, with the former team winning with a difference of 2 goals.

The 3 goals were from Zaid Makhani, Arnav Asvani and Rahul Chopra. 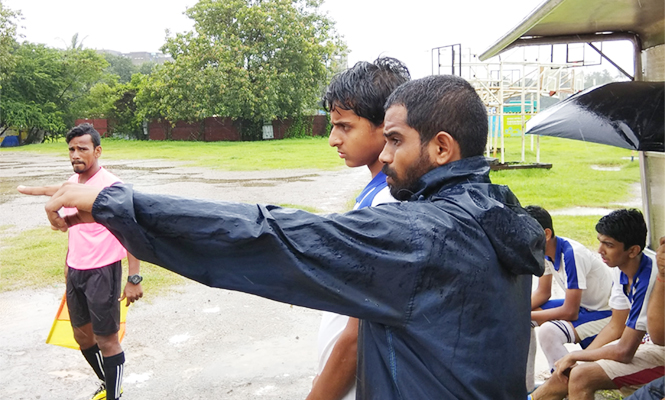 Saint Mary’s dominated possession in the first 15 minutes, the Navy school boys made some faint attempts to create chances which were denied  by the skipper of their opponent team. St. Mary’s made full use of their possession as their midfielders kept supplying their forwards with lobbed deliveries; a sensible approach considering the pitch was wet and playing through balls was a lost cause.

But in the 14th minute of the game, Zaid Makhani converted Arnav Asvani’s accurate corner into the first goal of MSSA 2017.

Vincent Charles and Asvani were the only players backed by their skipper Joel who prevented any scope of their opponents to score an equaliser, and Asvani lead his team’s attack with dangerous counter attacks.

In the 5th minute of the second half, Asvani struck a skilled half volley in the back of the net and destroyed the opponent team’s morale as the remaining of the second half was a series of loose passes and wasted opportunities. Another defensive setback in a corner lead to a goal after 4 repeated strikes at a fallen goalkeeper, Rahul Chopra scored with a simple tap in.

Navy children’s school grabbed a consolation goal which was a result of a great run by their skipper Darius.

St Mary’s ICSE stood tall in a very heated game with a lot of tackles and one injury on their side, however everyone kept their cool and there were no bookings. Their captain, Joel,  said, “if they give it to me (tackle) I give it back to them.”