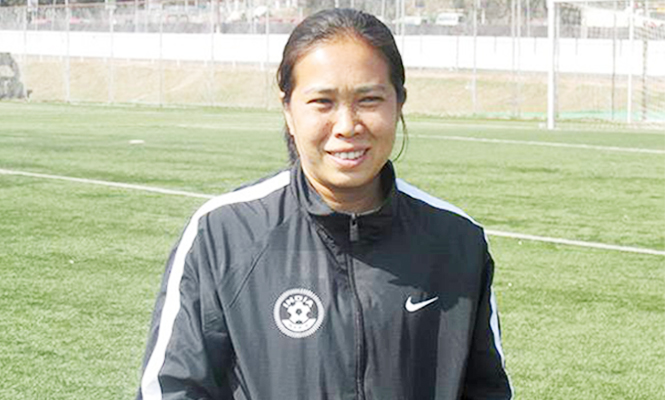 In a country like India, where sports has always meant cricket, for football to find its footing has been a struggle. But then imagine, in a country like India, where patriarchy rules, to have women playing football! But is is happening! And one of such a footballer has recently been awarded the prestigious Arjuna Award — Oinam Bembem Devi. For the uninitiated, Oinam is a woman footballer from Imphal, Manipur, nicknamed “Durga of Indian Football” and is currently involved in spreading awareness about women’s football in India.

Recently, Team KheloMore caught up with her. Below are some excerpts from an interview with her.

Q: Congratulations on winning the Arjuna Award, for a sport you’ve worked so hard at promoting. How does it feel?

A: It’s like a dream come true! The words fall short in expressing my feelings here! All my sacrifices, since I started playing football, have paid off.

Q: We have recently had the inaugural season of IWL, where you drove the Eastern Sporting Union to the debut trophy. You have a player/Manager role in the club, how was the experience?

A: It’s was great, a real opportunity for the young girls all over India to play and make their mark. The first season is always experimental and I hope to see more spectators this season; it always feels better to play in a packed stadium. We had 6 teams playing during the first season; and are expecting the number to go up this year. I recently visited Orissa for some trials; and the lack of players is very obvious there. But we have enough players to make 5 teams in Manipur and I feel that they can easily be loaned to different teams to start the wheel rolling. 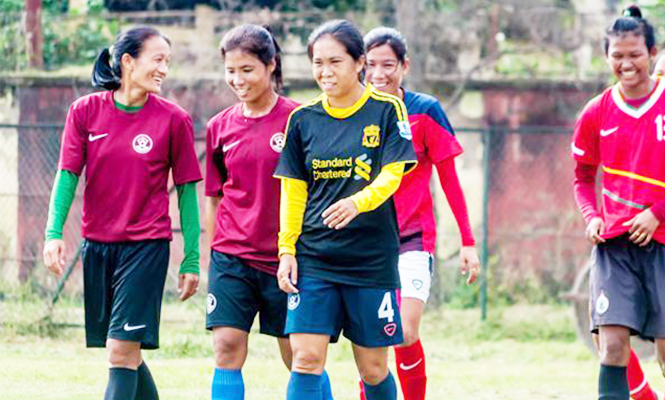 Q: Manipur and other north-east state players dominate the National XI, be it women’s team or men’s. To what would you accredit this aspect to?

A: In Manipur, we have a support system for players and athletes. We have always taken the game seriously and have now set up about 10 grassroots academies working on boys and girls together since they are 5 or 6 years old.  I don’t see that in Mumbai and Delhi or  other cities. In fact, what I often see is that parents from these cities are more focussed on the academics of their children — they want an engineer or a doctor rather than a footballer in their family. Until parents’ attitudes change, players from other Indian cities will not be such a common sight in the national teams.

Q: For the first time in a long time, Women’s team, at 56th and Men’s team, at 97, are within top 100 FIFA rankings. Are we becoming collectively conscious now?

A: Yes, and it is a great change! In fact, I have seen a big change in the way parents were encouraging and supporting their kids, in Mumbai, at various tournaments recently. Having young players available is a boon and it helps us to identify and rectify the errors early. The skill part of players can be highly improved to help them make that extra pass. We all have to understand our responsibility to nurture and appreciate players whenever possible. Having such a big country has it’s pros and cons and if I would like to see more young players coming every year.

Q : Most of the successful footballing nations follow the tradition of getting young players and watching them grow. They have been steadily reaping the rewards. How much does starting early help?

A : Immensely. Take me for example: I started playing with boys when I was around 10 and soon found out how much that helped me. I was quite lanky with short hair and and even donned a boy’s name to quash any form of suspicion. Playing with boys made me stronger, tactically astute and confident.  Although, I believe in equality, playing with physically stronger boys helped me a lot in gaining confidence when playing with girls along with the tactical part of game.

Q : You have played in Maldives at club level for 2 years. How was the organization structure at their club level. Did you find players from other countries in the league?

A : Playing in Maldives was one of the best playing experience I have had. They have a proper structure although having just started the league. They had good quality turf and natural grass grounds. A regular person in Maldives take it as their responsibility to come and support their team. During tournaments, we would play in front of a packed stadium, which is a dream for any player. The IWL games were played in an almost empty stadium in Delhi, I hope for more spectators this time around. Other difference I saw was their gesture, an acknowledgement and congratulations to a player. I have so many trophies of that 2 year period and it takes me back in time. We are all humans and crave appreciation for the hard work. I wish IWL second season will bring greener pastures for players.

Q : Finally, What would be your message to all young girls toiling everyday to make a mark in football?

A : Perseverance and tenacity is very important. If you have chosen to live a certain way of life, sticking to it shouldn’t be an option. Going all the way defines winners .