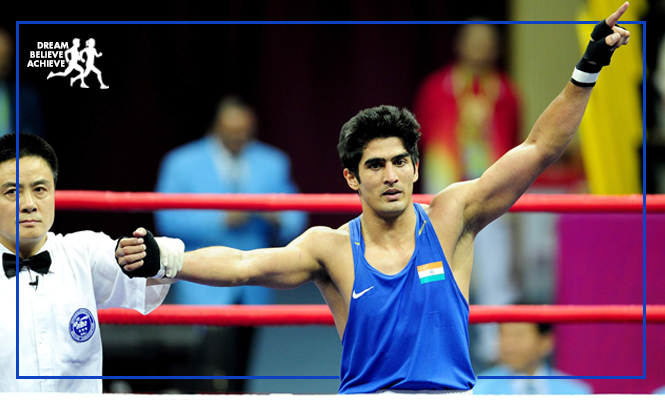 Vijender Singh was born on 29 October 1985 in a poor family in Kaluwas, a village located near Bhiwani in Haryana, India. His father, Mahipal Singh Beniwal used to work extra hours in order to be able to send Vijender to the village school. He further did his Bachelor’s from Vaish College, Bhiwani. Vijender got inspired by his older brother Manoj’s boxing abilities and decided to take it up himself. In fact, Manoj’s boxing credentials got him into the Indian Army in 1998 and hence enabling Vijender’s financial support in the sport. This is how he joined Bhiwani Boxing Club; catching the eye of coach Jagdish Singh,  who recognized his talent and encouraged him to take up boxing as a profession. Around this time, Vijender tried his hand at modelling to finance his training.

Vijender got his first recognition after winning a bout in state-level competitions, followed by a silver and gold medal in sub-junior nationals in 1997 and 2000 respectively. However, it was in 2003, when he won a silver medal in the Afro-Asian games that his career turned upwards. He then participated in 3 Commonwealth Games, 2006 Doha Asian Games and the 2008 Beijing Olympics – winning 1 Gold Medal, 2 Silver and 3 Bronze Medals!

Vijender Singh turned to professional boxing in June 2015 and left his amateur career when he signed a multi-year agreement with Queensberry Promotions through IOS Sports and Entertainment. Presently, he has a hundred percent record in the professional career with record 10 wins out of 10 fights.

Vijender Singh is undoubtedly the best ever boxer India has seen. He recently won the WBO Asia Pacific Super Middleweight title after defeating China’s Zulpikar Maimaitiali. He dedicated his win to India – China friendship at the time when the tension between two countries over infamous Doklam issue was at its peak.