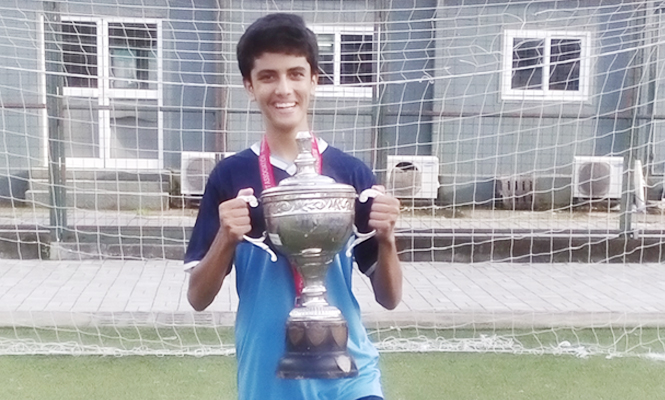 The game started brightly, with both sides showing early promise. It was quite real to see passion in both teams being in a final. No 11 from St Pius was quite bright in attack and made spectators jump off their seats one or two times early on.

Bombay Scottish was a bit more confident about their ability. They played from the back and Siddharth, Captain and a ball playing defender was instrumental in solidarity. The goalkeeper was quite active and exuding confidence to the team when low. The second half started with more impetus from both sides. Shortly in second half, Pius’ goalkeeper made a horrendous error in judgment and came out of the box, resulting in a well taken, poacher quality goal by Bombay Scottish.

This was the mood lifter they required.  Pius did attempt to threaten few times, as a knee-jerk reaction to the goal, but were unable to make a mark.

The game became a bit tedious for a short while, but then came a moment of magic by Scottish’s Maherjad, and MVP of the game. He slalomed around the 18-yard box and immaculately lobbed a perilous goalkeeper.

The Scottish crowd erupted; it was a goal to win any final!