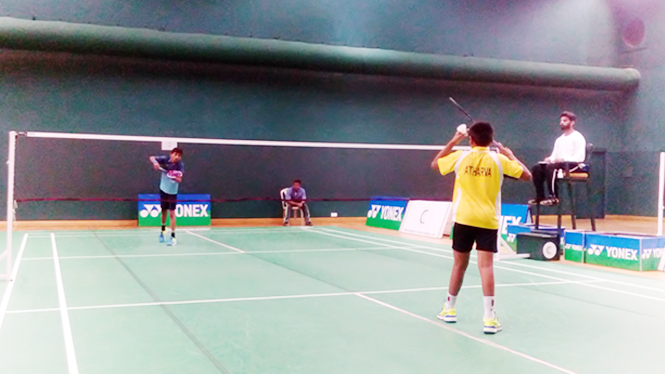 One could notice that competitive level had gone up as every point earned was a well deserved one. In this match, an Unseeded player, Rituraj is playing Atharva, No. 1 seed, U-14. After dropping a few early points, Rituraj was up to every shot by Atharva and used his athleticism to dominate the proceedings. Rituraj put in a show with taking most points and marking a comeback from 2:4 down to 16:6. Gentle flicks, powerful smashes and full use of court space was seen in that spell. Atharva tried to come back but the damage had been done already and Rituraj won the set by 21:10.

The set started with Atharva starting brightly and racing to 4:0 in no time. This set mattered most to No. 1 seed, Atharva as an unseeded player had just downed him in the first set.  Rituraj showed excellent resilience as he put everything he had to match Atharva and equalling scores at 8-8 and 10-10. However the reliance on strength was visible through Rituraj’s body language as he seemed visibly sweaty in second set break. Atharva took advantage with precision drops, backhand chops and took a healthy lead at 16:11. It didn’t took long to nab the set for Atharva after realizing Rituraj is showing signs of fatigue.

Last and the deciding set was on. Both players had to give their best if they wanted to win. Atharva, started with dominating the set and Rituraj. After winning first 2 points, and losing only 3 points till the break, he seemed to have got a hold on Rituraj. On the other hand, Rituraj was feeling let down after early fireworks. With this tournament as his first, in which he managed to beat 2nd seed player and and reach to the finals to play against the 1st seed is no minor feat. Rituraj put in everything but only managed to get 7 points before Atharva collected the set and the game.