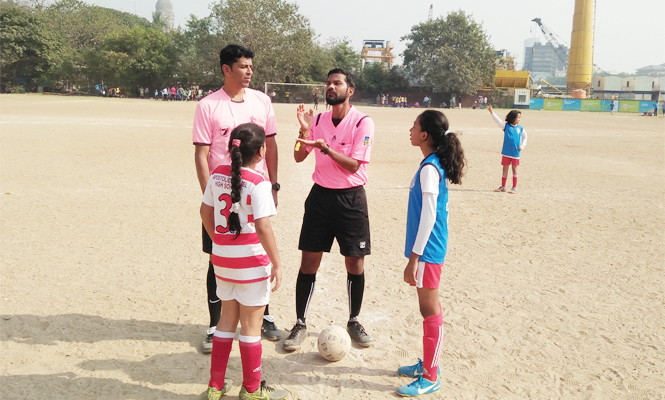 The Game kicked off with some interesting rules, since they were U/12 only half the ground was being used & there was no offside. As the game progressed, it was clear that Arya Vidyamandir was controlling the game. Within 5 minutes the pressure showed off in the Apostolic Carmel goalkeeper and Vanishka of RSB Arya Vidyamandir scored an easy goal giving her team a lead of 1 – 0! Almost at the end of the first half, Tansihka of RSB Arya Vidyamandir showed some beautiful dribbling skills which was applauded by not only her team’s coach, but also the coach of the opposite team! She took a beautiful cross & Anushree scored a superb goal, helping her team lead by 2 – 0 at the end of the first half.

Second half kicks off with the referee’s whistle and Apostolic Carmel attempted to control the game but Arya Vidyamandir’s defence stood firm. They were attacking, in the process helping Anushree score a goal; making her the highest goal scorer of the tournament.  AVM was leading by 3 – 0, but with 1 minute to go, Kiara the most promising player of Apostolic Carmel’s team scored the lone goal for her team. The match ended 3 – 1.